An Appendix for Resonance and Touch 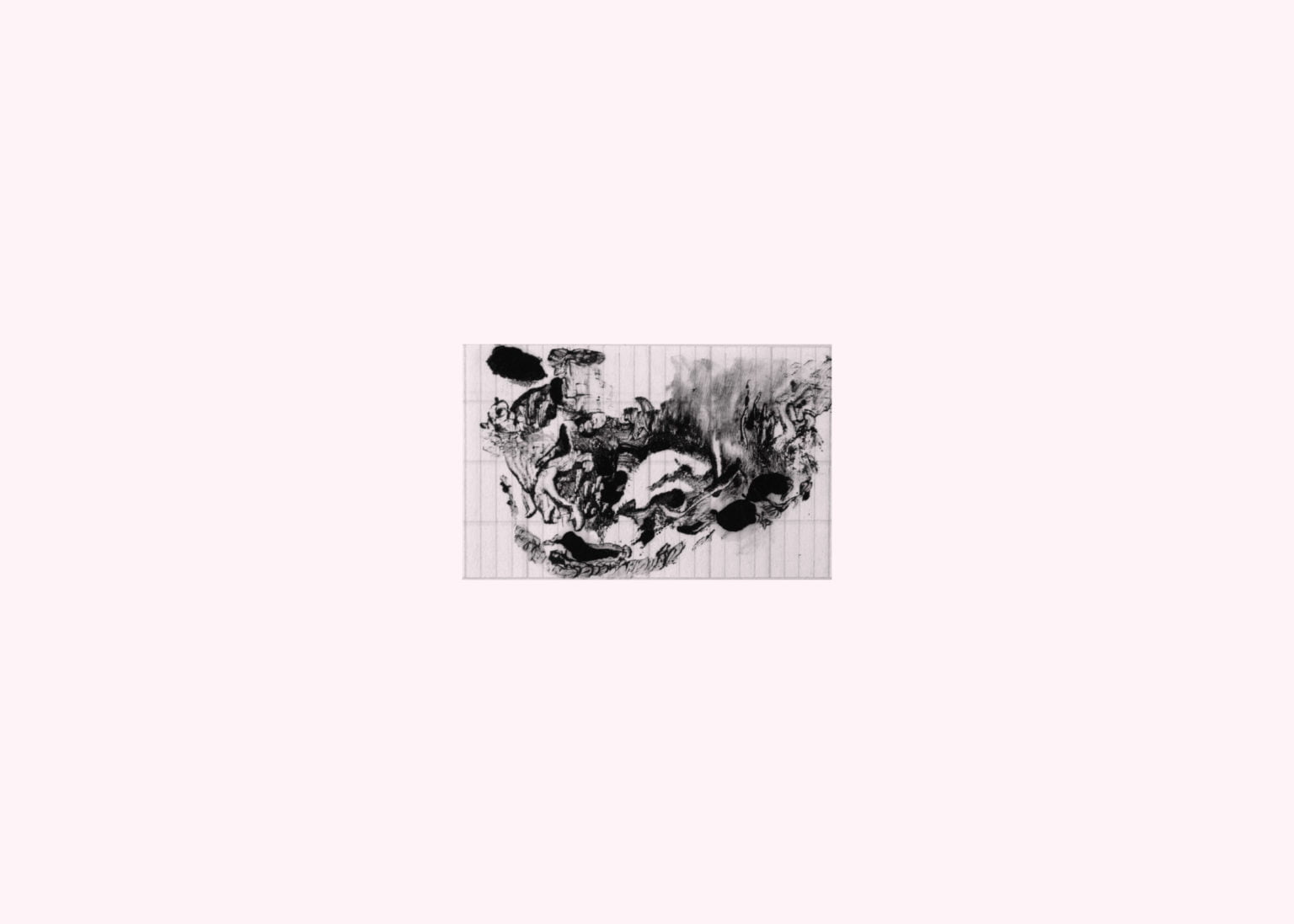 The following drum patterns are taken from the passages with time changes, in “the variable” section F, of the score Sonic No. 7 & No. 10, for solo derabucca, written by Egyptian American composer and performer Halim El-Dabh (1921-2017).

This text is an ekphrasis riff, an appendix to an extended study on the score first written in 2018. The text is meant to be read in the company of a drum, preferably a derbucca, but any drum will do. Hold it close while you read, allow your voice to resonate to the drum.

The top bar of the staff notates the dominant hand (usually right), and the bottom bar notates the subordinate hand (left). Try to play the rhythm in a repeated loop, at least 10 times, at 180-200 BPM, before reading through the paragraph. If you can’t play, sing the dominant rhythm out loud (drum vocables are written below the notation).

Test the resonance of your percussion instrument and heart frequently.

Avoid forcing rhythms, as well as “booms” and distorted noises. Treat the percussion instrument and text with extreme sensitivity.

Fast times. Frozen time. Time changes in odd times.[1]  As a drummer, I’m hypersensitive to time, but, lately, it’s been OTT-OCD. The irregular pace and emotional drama of pandemic-thawra heaviness—days that seem endless, months that fly by—got my internal metronome all discombobulated.  In drum slang, the drummer who can’t keep a steady beat, someone rushing and dragging the tempo, is called a russian dragon (rushin’/draggin’). Out of sync, out of sorts, it’s painful to witness. Keeping bad time hurts life. This seems to be a pretty good description of this past year’s cadence as well. We’re all just struggling to knuckle through until the song’s end.

What’s proven to be necessary, amidst all this, is the need to create a new relation to time: intervals based on the intrapersonal and interpersonal worlds of affectionate closeness and relativity.  To think about time in this way is to ask ourselves to think deeper about our own relationship with the past, our ancestors, and our place in the world. It also makes me think about the work of Halim El-Dabh, someone who was thinking deeply about time, dreaming up new worlds.  Halim’s career spanned over 8 decades, continuously creating music until his final rest in 2017, at age 96. His wife Deborah told me that, although he was not well enough to play music in his last year, he was still writing new works until the very end.  It was only after he was no longer able to physically write, that he seemed to know it was time to move on. He passed away just a few weeks later. In looking back on his incredible and diverse oeuvre as a musician, creative ethnomusicologist, a pioneer of electronic music, an educator, Pan-Africanist, and one of the most seminal composers of the 21st century,[2] we can identify 3 fundamental constants that formed the foundational elements of his musical cosmology: his commitment to writing music as much as to playing it, his belief in the tremendous power of the voice, and his lifelong devotion to drumming.  I’d like to take a moment to celebrate his relationship to the drum, to rhythm as an embodied practice rooted in cultural, agricultural, and enhanced time-consciousness.

Last December, I had the chance to visit El-Dabh’s archive at his home, an unassuming bungalow in a quiet, tree-lined neighborhood, at the edge of Kent State University, in Ohio. It was here where Halim helped establish the Department of Pan-African Studies, in 1970 (the second oldest in the US, the first being Howard University, which Halim also assisted in establishing). This was just a few years after setting up the Orchestra Ethiopia in Addis Abbaba, at the behest of Haile Selassie.  Within his archive, amidst a trove of treasures and photos from his world-wide adventures in sound, next to a treatise on his “Color Music” notation system, based on hearing colors, there is a binder labeled “Heteroharmony”, a collated collection of notes around a concept he developed, and which describes, on a macro level “where two music systems operate simultaneously, causing friction. At the micro level it is called hetero-friction similar to hetero-harmony, except it is not two systems but only two tones sounding simultaneously causing friction. Both result in friction, yet are also complementary.” [3] Among his papers, we find sketches of poems, drawings, snippets of musical ideas, and reflections on current events that work towards positioning and defining this concept. Embedded in this mode of research is an approach that creates textual possibilities of inquiry, beyond any sort of individual authority.

Our story begins with the Beat, with a capital B EAT, the mother of all Beats, THEE rhythm of the cosmos. If movement holds the key to consciousness, this is the rhythm that makes life dance. This was the beat that Halim tapped into when he dubbed out a zaar ceremony in Cairo in 1944, scientifically engineered electronic music. Although you can’t hear anything that resembles drums in his remix, there were certainly drums in the ceremony he recorded. We know that drumming is a necessary element for the healing energy in this ritual. This power, in the rhythm-activated, synchronized congregation, was, I believe, what Halim was drawn to, and what he spent his life trying to understand. He was 88 when he wrote one of his most iconic works for percussion, Symphony for 1000 Drums (2009), a late style opus that serves as a kind of summary of his life in drums, written with exactness in its brevity (just one page), but infinitely complex in the power and performative gestures embedded in the score, which doubles as a recipe for how to conjure a rainbow.

A fragment of a page from Halim’s notes on heteroharmony, reads like a poem:

I think about the meaning of the minus universe. Perhaps, to use sound engineering terminology, it’s a kind of subtractive EQing, whereby fidelity is created by taking away unwanted frequencies, in order to allow for certain voices and harmonies to be heard with more clarity. Or, perhaps, as in politics, this might be thought of as the non-aligned, those who reject established orders, be it religious, neo-liberal or antiquated leftist—all of them means all of them. This elimination requires visualizing the difficult transition from minus to plus, from cancel to council. Or, sculpturally, as in a form defined by a process where the positive is not yet known, but in which exists definitive material conditions that must be subtracted to realize the in-born manifestation of the object. All of these require the delicate skill of shrinking, to reach a point where one can create their own gravity that operates on an entirely self-dependent system of physics, reaching prime energy.

In rhythmic terms, maybe this is just subdivision, breaking the beat down into the smallest counts, or in the case of this essay, breaking apart a full score to focus on individual bars. A rhythm that might have a long count before repeating, such as the Dawr al Kabir, with 56 beats to the cycle, requires one to continually break it down into counts of 2 or 3 beats. The rhythm above, in 7/8, could be divided into counts of 2 3 2. Just as our day is broken down into 24 hours, every song has its own sun, which it revolves around, with the count as the number of atomic units in that revolution. That is the prime energy which is danced upon -2 feet, 2 steps.

We understand the derbucca’s structure in our own image: a body, a neck, a head, skin. And when we play the drums, these parts transmogrify into our own, sounding beyond the body.  The drum is an appendage, a kind of blurry waveform that contains multitudes of cacophonous, cosmic abstractions, which skilled percussionists are able to attune to.  It is a tool for moving, for mourning, for feeling, a tool for finding new selves, new movements, and new forms of joy and pain. The drum calls and congregates. The drum defies and protests. The drum brings us together and transmits energy and knowledge in ways we’re still discovering.

Halim was a passionate ethnomusicologist. He spent a considerable part of his life travelling throughout Africa and Latin America, at first as an agricultural engineer, in the early 1940s experimenting with sound as a natural pesticide and growth enhancer. During his travels, he would meet with and record local musicians, learning their songs and rhythms that would later inform his own compositions.  It was a process that was unlike common, extractive European ethnomusicology research, in that El-Dabh was sensitive to the value of the exchange.  An integral part of the process was sharing knowledge through the drum—transmission through vibration—both conscious and intuitive, cellular.

In a lecture he gave at UNYAZI Electronic Music Symposium, in 2005, in Johannesburg, he explained, in his usual emphatic cadence, his experience pirating the Zaar ritual, which he later synthesized into pioneering electronic music in 1944:

“These women were transforming sound, in their own way, coming out of their own bodies. That they knew how to transform elements and change waveform, and change the vibration around their voices. Because, in their ceremony these women were flying, practically, I mean their body was moving out, and they had an enormity of energy, in a sound, basically, a sound characteristic that affects the body, and gives you a kind of healing. I mean, you could be bleeding to death and with the sound they created the bleeding would stop.” [4]

Rhythm is time consciousness. We can begin to try and understand rhythm through terms such as meter, accent, duration, and syncopation, but in reality, rhythm is: everything. If time is a thing the body moves through [5], then rhythm is the control mechanism.  A drummer can push and pull time, and we twirl in step. Long before computers, before the printing press, before the written word, before the fluctuation of stocks and financial engineering, perhaps even before spoken language itself, was the drum and its rhythm.

Brought into this earth from distant stars, the drum has been a technology essential for our capacity for complex thoughts, engaging the physical and mental, social congregation and introspective meditation.  Today, as we learn to dance apart, distanced, at the screen as much as away from it, rhythm continues to be a tool for syncing, transmitting, connecting.  When we do congregate, in protest, in celebration, in memoriam, the drum and rhythm is and will always be the engine for a cacophony of steps marching together, fueling our rage and collective vibrations.

“What a powerful technology it is to hold space for + bear witness to the movement, care, vision, labour, of one another.” – Legacy Russell

An important but often overlooked aspect of playing any rhythm, is breath control—when to inhale and exhale, in sync with the rhythmic count. Great disrupters of this rhythm, such as COVID-19, which attacks our lungs and constricts our breathing, such as police brutality and choke holds, are proof that we need to be more attentive to the rhythms that have been passed down to us. To hold them sacred, celebrate them, learn them, proclaim them, and affirm our presence.  Rhythm is a tool that moves us not only in our present bodies, but also connects us to the legacy from which the beat is born out of, for all those who carried this rhythm before us, and to all those who will reflect this starlight into the future.  Halim’s relationship to time was forever shifting, his understanding of rhythm was astronomical, but, above all it was his understanding of the drum as a tool, as advanced technology, that was able to resonate and touch the interpersonal and intrapersonal worlds of affectionate closeness.

[6]  Excerpt from a binder of notes labeled “Hetero-harmony”, from the Halim El Dabh archive, date unknown.

WITH CLAPS AND THANKS TO: